This is another basic trick, that is very easy to master! 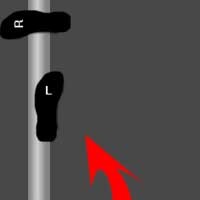 When you skate to the object, you want to skate to it straight on, unless you're spinning to it. Jump a little above the obstacle, to see exactly where you're going to position your feet.

Lots of beginners step into the grind, by first putting the back foot onto the obstalce, and then the front foot. Forget it! It will not work when you're going to grind real things like rails or ledges - it also looks terrible.

If you're grinding ledges or curbs, you need to have your soul foot perpendicular on the obstacle or else your souling foot will slide out of the soul position.

Put the weight on the souling foot - your back foot in this case. This is the case for almost every grind with a souling foot in it. To add style, try to get as low as possible - this is called a 'lowrider soul'.

Some skaters put their weight on the torque foot instead of the souling foot - but that is often to compensate for the grind being switch - for instance switch topside torque soul.